The Hidden Secret, Triangles and Lozenges 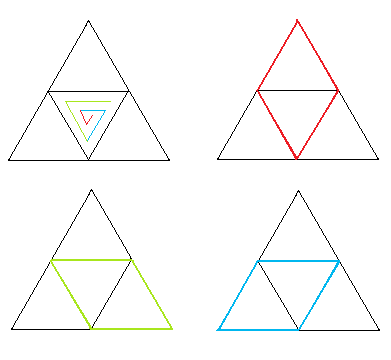 Above is a geometric configuration which shows the Hidden Secret. The equilateral triangle is symbolic of the Godhead, of which we are only aware of three dimensions, the fourth is hidden. This configuration symbolizes the four faces of God. I don’t know how old this symbolism is or how it came to be this way, but at Stonehenge Lugh’s head was an equilateral triangle. The equilateral triangle was used by the Egyptians, and along with the right-angled triangle, is still a symbol among the Masons. To the Egyptians this triangle represented animal, vegetable and mineral. Christianity uses this triangle which is symbolic of the Trinity. The central triangle can be joined to any one of the other triangles to create a lozenge with angles 60° and 120°. These are the same angles found on the Wessex lord’s small gold lozenge.

By applying all the inside angles of the three coloured lozenges, I created a spiral inside the central triangle of the first triangle. This looks like a geometric formation of a child in the womb, or the germination of a seed with its first tiny root. The hidden potential which exists within all life forms. Not just physically but also psychologically. It’s that spark of life which comes from and connects us to the Source. The downward pointing triangle is symbolic of the feminine. This divided triangle can also have the Qabalah meaning of Kether, Chokma and Binah. These are the first three Divine Emanations, known as the Three Supernals. Kether means Crown, Chokma means Wisdom, and Binah means Understanding. Together with these three there is an invisible Sephirah named Daath, which means knowledge. This Sephirah never appears on the Tree of Life, it always remains invisible, the Hidden Secret. Dion Fortune:

“we see that in Daath, is the secret of both generation and regeneration, the key to the manifestation of all things through the differentiation into pairs of Opposites and their union in the Third.”

From Kether comes the first emanation which is Chokma, a male principle, Binah emanates from Chokma, she is the female principle. Together, Wisdom and Understanding create Knowledge, but all this would be impossible without Kether, the Crown, since they are all emanations of Kether.

Lugh consists of one equilateral triangle, three with angles 30°, 120°, 30°, and six, with angles 30°, 60°, 90°. Bardic number values can be applied to these. One is Unity and Purity; three is the Trinity, past, present and future, or chaos, balance and creative force. The Bardic value for six, is Time. Knowledge has always remained the hidden secret at Stonehenge.

In diagram A, the black lines are the basic figure of Lugh. The gold and purple triangles just show which part of the body they came from among the triangles below. The measurements for creating the various triangles came from the original black lines.

In diagram B, I’ve outlined all the triangles which I refer to as the Temple Roof. This one has angles of 30°, 120°, 30°. These three triangles can be made into one lozenge with angles 120° and 60° , and one equilateral triangle.

In diagram C, I’m showing all the triangle 30°, 60°, 90°. When each triangle is put together with its mate, the resultant triangles are equilateral.

After creating the spiral in the first set of diagrams, I thought I’d try it with these triangles. The two red sides are equal in length, but the other coloured lines only have one line which is the same length as it had in the original triangle.  At first I only used the red, blue and green triangles, but the blue and green seemed  so much smaller than the red one, that I went looking for more triangles which would be logical in their function. The gold triangle includes the head and torso. The purple one the same but down to just below the knees. Not seeing any more, I put these together, and it does look like a snail. The coil on a snail shell is biggest on the outermost coil close to the opening. Nesting the triangles together, created an interesting result, since this rather reminded me of elevation markings on maps.

The Wessex lord’s small gold lozenge can be made with some of these triangles. Each red right-angled triangle includes the head, torso and one leg. The blue were the legs, and the green the arms. The Purple? Must be the robe since it goes below the knees. The Star of David can be made with two of these equilateral triangles. This star symbolizes both the male and female elements. The upward pointing triangle is male and the downward pointing triangle is female. In the first diagram at the beginning, the downward pointing triangle contained the child or seed. How interesting, that a surveying device could give such results.

The triangle making up Lugh’s torso and arms always reminds me of the Temple Roof, and when you lift off the roof, what appears is a geometric formation of the compass, which on Masonic devices is supposed to be open at 60°.

From time immemorial the Equilateral Triangle has been preeminently the symbol of Deity. For the Triangle is the primary figure from which all others are built up and the Equilateral Triangle, being wholly symmetrical, is the one perfect Triangle, and thus clearly becomes the symbol for the Perfect Being in which all things find their beginning.” (1)

The Triangle appears in Masonry in two forms, the Right Triangle, i.e. that Triangle which has one of its angles a right angle, ninety degrees, or one-fourth part of a Circle, and the Equilateral Triangle, i.e., that Triangle which has all its sides equal, each to the other, and, of course, has each of its angles equal to sixty degrees.  Although these two Triangles have, symbolically and historically, certain features in common, for example, both were used by the Egyptians and both present the significant number Three, yet their symbolic suggestions are in these respects so different that they may, not improperly, be considered as distinct symbols.” (2)

This formation of the Temple Roof and the Compass shows up at Nabta Playa, Egypt also, but since this egg-shaped circle was built  c6000-4000 BCE, this was long before this sort of geometry was used to create the Trilithon Horseshoe. Quite old by then in fact.

Stonehenge itself sits at one corner of an equilateral triangle which was discovered on the landscape by Sir Norman Lockyer (Astronomer-Royal). The sides are six miles long, Grovely Castle and Old Sarum sit at the other two corners. Grovely Castle likely started life as a sighting tump, it’s on the ley to the Grove. Below is part of a map found at Ancient-Wisdom co. uk., it shows the St. Michael’s Ley and several others. I’ve been busy stringing lozenges on it, with sides six miles long, and angles of 60° and 120°. The two lines of incidence, the St. Michael’s Ley and the Apollo/St. Michael Line give these angles where they cross over one another. On the map, the black line is the St. Michael’s Ley, which is not perfectly straight from one end to the other, which is likely due to the terrain, but I strung a line from St. Michael’s Mount to Yarmouth. The two lines cross at Big Rings, which also sit dead centre on a conjunction of the Net. I strung the Wessex lord’s large gold lozenge on the map just out of curiosity. I have not had the opportunity to investigate this whole area further.

The next line east of Big Rings, will take you NW to Droitwich, then on through Ludlow, and on to the pass through the Clee Hills into Wales. On top of Titterstone Clee Hill there is a modern triangulation pillar, but just to the left of it, there’s a Bronze Age cairn. From the Clee Hills you can see Snowdonia, Cadair Idris, the Brecon Beacons, the Black Mountains, The Long Mynd, Stiperstones, Corndon Hill, Radnor Forest, the Cotswolds, Clent Hills, Turner’s Hill, Barr Beacon, the West Midlands, Cannock Chase, the hills of the Peak District, The Roaches and Winter Hill. Seems those ancient surveyors were just as interested in this spot as our twentieth century surveyors. It certainly gives high views and long sight.

The device of lozenges inside lozenges can be found on a beaker from the West Kennet Long Barrow c2400 BCE, on the two gold lozenges found in the Bush Barrow. There are triangles close to the rim and several rows of cording on the beaker. This is the typical shape of Beaker pottery. At the moment it is being debated whether there were Beaker people, or whether this beaker style became very popular and spread all around. Since most beakers are between 6-8 inches tall, I’ve often wondered if this was a measuring device. In most ancient societies, any grains were held by the ruler and the temple.  It was given out at a central location. On Malta their grain was ground in the temple. 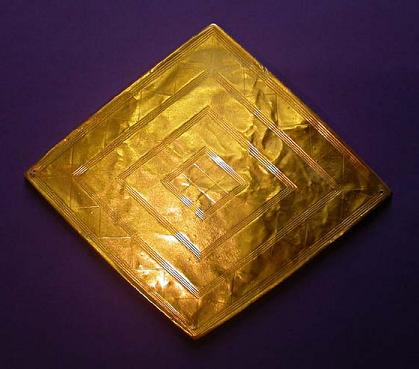 Lozenges inside of lozenges can be found on the Folkton Drums, c 2300 BCE, they also have the Akhet on them. These chalk drums were found buried with a child in a tumulus which was a way marker through the Dales. The picture looks like a face between two mountains. The mouth is the lozenges inside one another, and the nose and eyebrows look like a big winged bird. Part of the Net is in the foreground on the small drum, and it looks like a chess board lying diagonally. The hidden secret symbol is also there. Lugh is said to have invented fidchell or chess. On one side panel there is an eight point wind star , and on top of one there are four spirals, the Four Pillars of the Earth. The people who buried this child gave him the means to find his way around in the Otherworld. His drums gave him the means to announce himself. Since the lozenge is the centre of the hidden secret symbol, the mouth may have been emphasising the fact that this knowledge contained on the drums was a hidden secret. The only way for a secret to no longer be secret, is to tell someone. So a cautionary  note for this small child.

These drums are an example of two separate traditions joined together. The Egyptian Akhet, the face between the mountains, and the big winged bird could be either the Ibis or the Crane.  But the Net and the hidden secret symbol come from Ogham. Some of the other elements are connected to astronomy, the eight divisions of the year, and the four cardinal directions and their cross quarters. The cross quarters are very prominent, and make X, the Sacred Place. But if the X is made the cardinal directions, then the square they are in turns into the Square of Enlightenment. The cross quarters generally lie behind the cardinal points. The Four Pillar of the Earth are the four symbols of the Zodiac connected to Sunrise on the Solstices and the Equinoxes. The small drum has two circles with lines around them, connecting them together. Sun and Moon? The large drum has  one circle in the centre with circles around it. This would be the Ash tree, the one spot you stand in with high views and long sight all around. Here we have examples of primitive materials used, but the brains behind these devices, symbols, and art were extremely sharp. They are also a good example of ‘writing’ without an alphabet.

Regardless of how primitive the materials used, among the people connected to the building of the ancient monuments, there were those who were well versed in astronomy, surveying and higher mathematics. For an in-depth look at the astronomy, surveying and mathematics found, not only at Stonehenge but also at many other constructions in the area, and also the mathematical codes built into the large Bush Barrow gold lozenge, see the following.

Part of the map of England, Ancient-Wisdom.co.uk